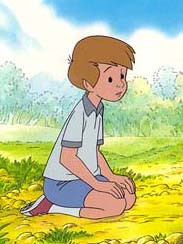 Age: 6
Gender: Male
Personality: Christopher Robin is a young boy constantly lost in daydreams. He's adventurous, imaginative, and spirited, and for the most part well-behaved and polite. He's the one that all the residents of the Hundred Acre Woods run to in times of trouble, and he acts as sort of the leader and the final say when it comes to big decisions on matters such as "what is to be done about Eeyore's tail?". But of course he always asks the opinions of all his friends!

Backstory: Christopher Robin is a small child who, when playing with his favorite stuffed animals, discovered that he can go to an idyllic place with them known as the Hundred Acre Woods. Product of his imagination, the animals take on personality, identities, and become not toys but friends, his best friend being the bear of very little brain, Winnie-The-Pooh.

Christopher comes and goes from the Hundred Acre Wood as he pleases. He is seen leaving for school, or being called by his mother, and the boundary between his reality and his world of imagining is never truly laid out or defined. But like a child playing with toys, through most of the adventures the residents of the Hundred Acre Woods get caught up in, Christopher remains mostly on the peripheral, since the focus is on his characters, his friends. Often he is seen showing up at the end, such as in the great adventure to save him from 'skull', or acting as a sort of mediator, as in the case of Eeyore's missing tail, but never is he the central character in one of the adventures.

Moral Standing: Good. Naively good. Christopher Robin is at that young age where he has the benefit of seeing things as mostly black and white, this is good and this is bad. However there are moments where he reveals the start of an understanding that there are grey areas. Yet for the most part his moral compass is pointed in the direction of the innocently good.

Dreams: In a way, the Hundred Acre Woods is the representation of Christopher Robin's dreams at this point. All his friends being a combination of his actual stuffed animals and his imagination that brings them to life. As with any child, the story hints at other playful dreams, or rather fantasies, such as being a pirate, or going on grand adventures, but they change from day to day whilst the dream of the Hundred Acre Woods remains mostly unchanged.
Fears: As a child, Christopher Robin has the fears of a child. Monsters under the bed, or in the closet, which would explain the existence of Heffalumps and Woozles in his imaginary world of the Hundred Acre Woods. However, in the world of the Hundred Acre Woods, he has his friends to help him, and thus he is gifted a new bravery is often shown being the courageous one when confronted by these "scary beasts." That or he's the one to show his friends that that 'monster' they are scared of is actually a tablecloth that looks like its moving.
Extra: (Anything else you want to add?)
Samples:
Writing Sample: Christopher on D_M
Collapse